If you had to name the worst household chore, snow shoveling would probably win by a landslide. It’s a pain (literally), it’s uncomfortable, and for some people, it’s too difficult. The best Greenworks Snowblowers out there can help to make winter’s worst chore a lot more bearable. The machines scoop up and blow away snow for you so that you don’t have to do any heavy lifting. Plus, they are powered by electricity, making them easier to maintain than gas-powered models.

Reviews of the Best Greenworks Snowblowers 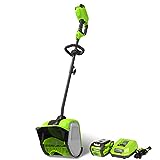 With a runtime of up to 30 minutes, a clearing width of 12 inches and a clearing depth of 6 inches, the GreenWorks G-MAX 40V 12-Inch Cordless Snow Shovel is just right for people who don’t have a lot of space to clear and who don’t get a lot of snow. 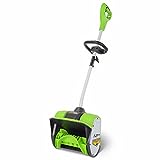 The Greenworks 8-Amp 12-inch Corded Snow Shovel is the plug-in cousin of the battery powered version. It’s ideal for removing small amounts of snow from small areas when you’ll be staying close to an outlet.

Best for Those Looking for a Gas Alternative 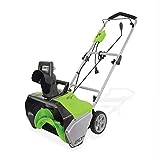 Maybe you need the power of a gas-powered snowblower but also want something quieter and a bit greener. While the Greenworks 13-Amp 20-inch corded Snow Thrower isn’t equivalent to a gas-powered machine, it does have a lot of similarities.

Best for those Looking for a High-Powered Cordless Snowblower 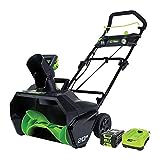 The Greenworks 80V 20-inch Cordless Snow Thrower can be the option for you if you are looking for a model that’s battery powered but still able to get rid of a fair amount of snow.

What are the Benefits of an Electric Snowblower?

You’ll need to check up on the oil and gas when you take the machine out for the first time in the season. Before you pack it away at the beginning of spring or whenever the threat of snow is gone, you’ll need to clean it up and winterize it for a few months of non-use. (Zing!)

Another huge issue with using a gas-powered machine is the adverse effect it can have on the environment. Even though motors are much cleaner-burning these days than they were decades ago, you’re still pumping out carbon and other pollutants every time you power up the old gas snowblower. Plus, gas and oil aren’t renewable resources, so once they are gone, that’s it for the planet.

In contrast, an electric snowblower is considerably more eco-friendly. It is also less likely to contribute to noise pollution in an area since it runs much quieter than its gas-powered relatives.

Some people are quick to point out that a big disadvantage when using an electric snowblower is that you need to plug that machine into an outlet. That’s fine if you’re clearing off a patio, deck or porch and are within a few feet of a house or an exterior outlet.

But what about if you need to clear the sidewalk at the end of a driveway or need to clear the bottom of your driveway, and the cord won’t reach? You can use an extension cord, sure, but doing so can create its own set of problems.

Cordless models, which are powered by a battery, solve some of the problems presented by electric snowblowers.

But then they have their own set of issues. One big concern is that they tend to have even less power and strength than an electric, corded snowblower. Another issue is that you’ll need to charge the battery between uses, which means that you can find yourself with a dead battery in the middle of a snowstorm.

Battery-powered snowblowers might not produce the exhaust and carbon produced by gas-powered models, but they aren’t necessarily the greenest option out there. Getting the materials for the battery requires mining, which has its own set of ecological considerations.

Will an Electric Snowblower Work for Everyone?

While an electric snowblower is the right pick for many, it’s not right for everyone. Here are a few things that might make you reconsider an electric model:

Features to Look for in an Electric Snowblower

Here are a few features to pay attention to when choosing an electric snowblower and what they mean for you.

Stay Safe While Using Your Snowblower

Snow removal isn’t exactly the safest activity. Shoveling snow can put you at risk for heart attacks and back and shoulder pain. (Harvard) Using a snowblower might reduce some of the physical strain and exertion associated with snow removal, but it also brings along its own set of problems.

Here’s what you can do to keep yourself and your family safe while snowblowing:

If saving the environment and your back are essential to you, then a Greenworks snowblower can be a good investment. Just make sure to choose one that meets your needs based on how much snow you get and the size of the area you need to clear.